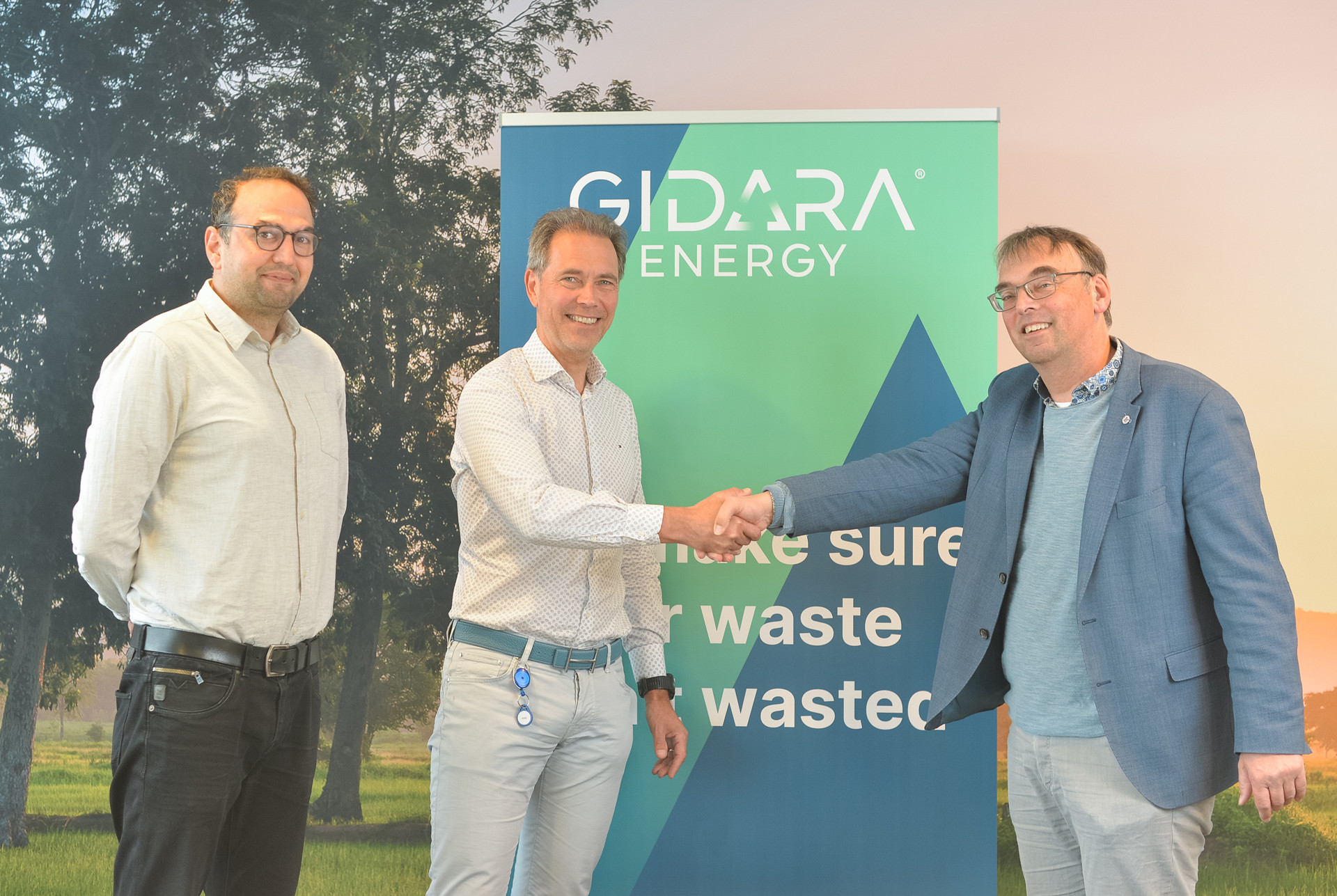 GIDARA Energy is to build a Gasification Innovation Centre in Rotterdam together with TU Delft. The centre will have a pilot-scale gasification island where, from mid 2023, mutual research can take place on the 'third generation' of HTW® gasification technology, with which biofuels can be produced from pure biomass/waste streams.

Gasification is a thermochemical process in which carbon content of biomass/waste streams is converted under thermal condition into syngas, in pure form a mixture of carbon monoxide and hydrogen. From this gas, chemicals such as hydrogen, ammonia, methanol and synthetic petrol can be produced. However, gasification is also known as a ‘complicated’ technology, with processes that are difficult to control and keep stable, often involving impurities and even tar. GIDARA, however, applies a modern, clean version of the technology with a track record of almost 100 years: High Temperature Winkler (HTW), whereby offering gasification at elevated pressure. It was originally developed in Germany in 1926 by Dr. Winkler, operating at atmospheric condition and further on was improved by Rheinbraun (now RWE) and Udeh (now ThyssenKrupp) to be operated at elevated pressure.

Coal or lignite was used in the first generation of HTW plants. In the 1990s, ThyssenKrupp/Uhde bought the technology from RWE and developed it further to gasify a mixture of coal and up to 60 per cent high plastic content refuse derived fuel (RDF): non-recyclable waste. Such operational experiences with co-gasification of lignite and RDF were conducted in the Berrenrath plant (in Germany). This plant operated for 11 years (1986 to 1997) and used a commercial-scale process for the production of ~90 KTA of methanol. The plant provided an availability of ~91% over a time of the next year with a long-term operation based on plastic/waste/wood streams. However it did not become a commercial success, because producing methanol from natural gas was cheaper at the time and customers were not willing to pay a premium for a more sustainable product. 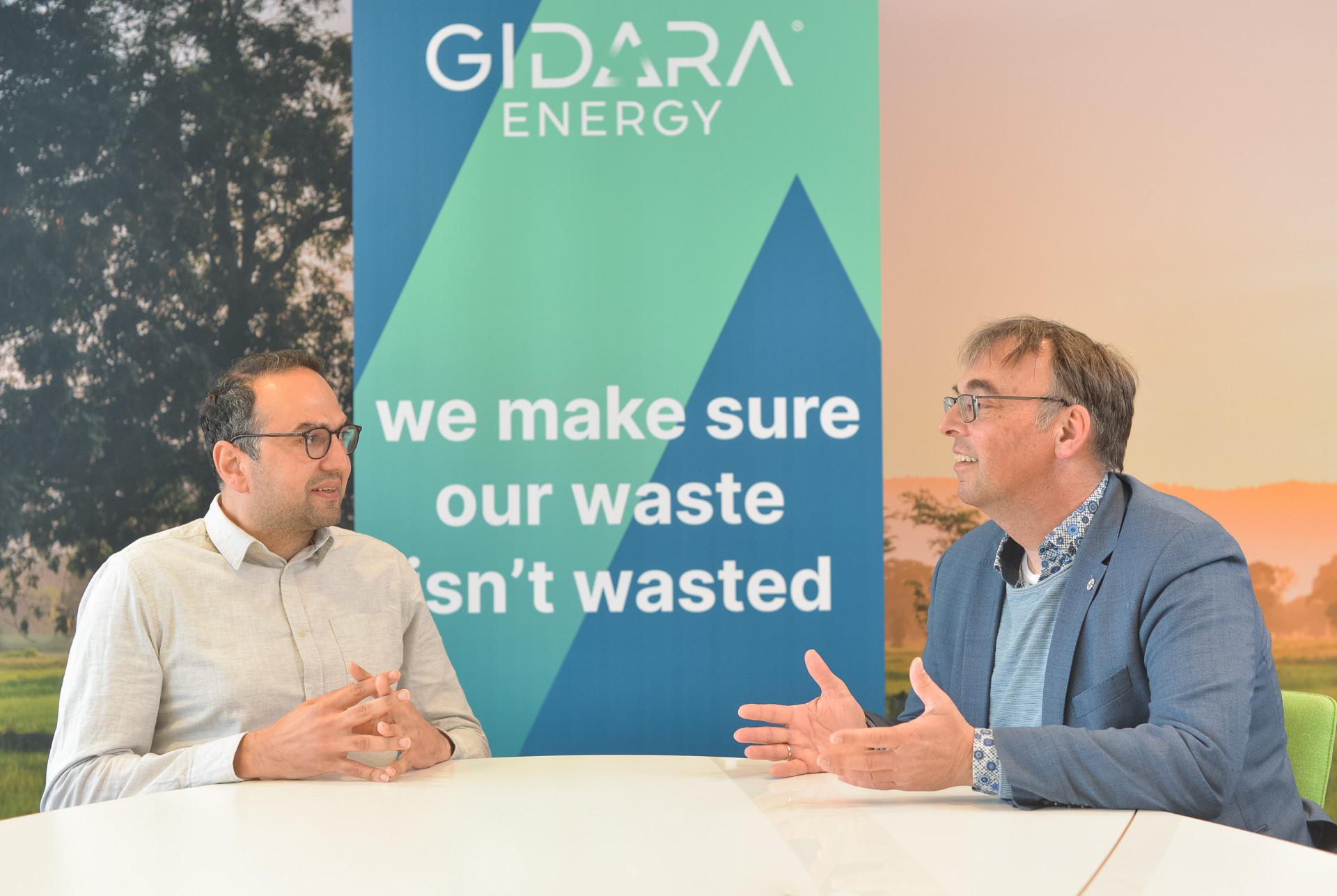 But times have changed. Natural gas is becoming more expensive. There is now a widespread call for circularity and green energy, and European regulations such as the Renewable Energy Directive (RED II) make blending biofuels into petrol and diesel mandatory. “It’s forcing big energy companies to invest in biofuels and biotechnology,” says Alireza Mohammadi, Vice President of Technology at GIDARA Energy. “Consequently, the market is booming.”

GIDARA Energy bought the HTW technology from ThyssenKrupp in 2019 and further developed it, making it possible to use 100% biomass/waste as feedstock. This includes solid household waste and food waste, but possibly also residual streams of more exotic origin, such as ‘olive cake’ left over after pressing olive oil. “It made gasification a green way of making biofuels, using a resource that is often incinerated and even landfilled in some countries.”

To realise this, GIDARA Energy is currently building a large commercial biomethanol plant in Amsterdam, which will operate under the name Advanced Methanol Amsterdam (AMA). From 2024, 87,500 tonnes of biomethanol per year will be produced there from non-recyclable waste equivalent to that of 290,000 households. “A licence has now also been applied for the construction of a similar plant in Rotterdam” says Mohammadi. “Also in the UK we are talking to several parties interested in bio-gasoline. We are investigating further possibilities in Germany, UK, USA and Belgium. We see a lot of interest, especially from big players among the energy companies. BP, for example, is going to buy the biomethanol from AMA to mix with their fossil fuels. We foresee that in a few years time, we will need 70 factories the size of AMA in the Benelux alone to meet the European market demand.”

To further develop the technology, contact was made with TU Delft two years ago and the construction of the Gasification Innovation Centre is now being announced. “The geometry and configuration of the innovation centre are almost identical to those of the commercial plants. This allows us, for example, to study how various feedstocks behave in the system and to find optimal operating conditions for new feedstocks. We also want to collect empirical data to improve the in-house HTW model/tool. And our operations team can give training there on a smaller scale,” says Mohammadi.

Professor Wiebren de Jong of TU Delft, who is an authority on gasification, is closely involved. He states: “We are joining the project with GIDARA to gain more insight into what is happening in the gasifier and to study the component decomposition and the formation of the syngas. One of our PhD students will be working on the project to gain more fundamental knowledge about this. A post-doc from TU Delft will also be working on measurement techniques for the more challenging components, which have to be cleaned before entering the synthesis section. My colleague Professor Johan Padding brings a lot of knowledge and experience in digital modelling into the project. We want to use these models to help scale up the technology and investigate what modifications may be needed for certain plants or certain feedstocks.”

“We are also trying to develop an advanced digital platform that will allow us to try out various types of gasification processes, improve operational conditions and overcome potential bottlenecks,” explains Dr. Elyas M. Moghaddam. He is R&D lead of GIDARA Energy and also a PhD graduate of TU Delft. “Simulations can give us a better understanding of the behaviour of the system. We have made a 3D mapping of parameters like temperature, concentrations, pressure, and other details in the gasifier. Until now, we could use a pilot-scale gasifier at the University of Darmstadt, Germany to validate our model, however the new Gasification Innovation Centre in Rotterdam will allow us to carry out experiments and measurements to further validate and simplify our 3D model. It is currently very complex; understanding the data requires a high level of expertise. We therefore want to build an improved one-dimensional model that would be more usable for GIDARA’s engineers, showing for example how the system behaves for different feedstocks or when adjusting the flow rate of gasification agents.”

It is the next step in the development of gasification technology that, after 100 years, has become increasingly optimised, increasingly efficient, reliable and safe, and can thus play a major role in the circular biobased economy of the future.