The High Temperature Winkler (HTW) technology is the most highly developed gasification technology utilizing bio-based feedstocks. The process was originally developed in the 1920s by the German energy company Rheinbraun AG utilizing lignite coal. Over the years, the technology has been significantly improved to achieve better results and has been re-engineered to handle a broad range of feedstocks.

GIDARA Energy acquired the technology in 2019 and has further developed it for modern, bio-centric applications.

The High Temperature Winkler (HTW®) technology is one of the most highly developed technologies. The process was developed in 1926 by Rheinbraun AG in Germany using lignite coal. In the 1970s, Rheinbraun (now RWE) improved the process by operating the gasifier at a higher temperature to increase the carbon conversion and to improve the quality of the syngas produced. Further development focused on increasing gas throughput, flexibility to operate with either air or oxygen, and increased efficiency.
The repurposing of HTW® towards bio-applications began in the 1990s. Initially the Berrenrath unit tested various feedstocks and demonstrated stable operation. The Niihama unit further demonstrated the viability of waste and bio gasification.
In 2010, ThyssenKrupp Uhde acquired the HTW® technology from RWE and further developed it. The combined investment since 1970 exceeds 500 Million Euro.
In 2019, GIDARA Energy B.V. (a Joint Venture of G.I. Dynamics B.V. (The Netherlands) and ARA Partners (USA)) acquired the technology from ThyssenKrupp, further developing it for sustainable applications. 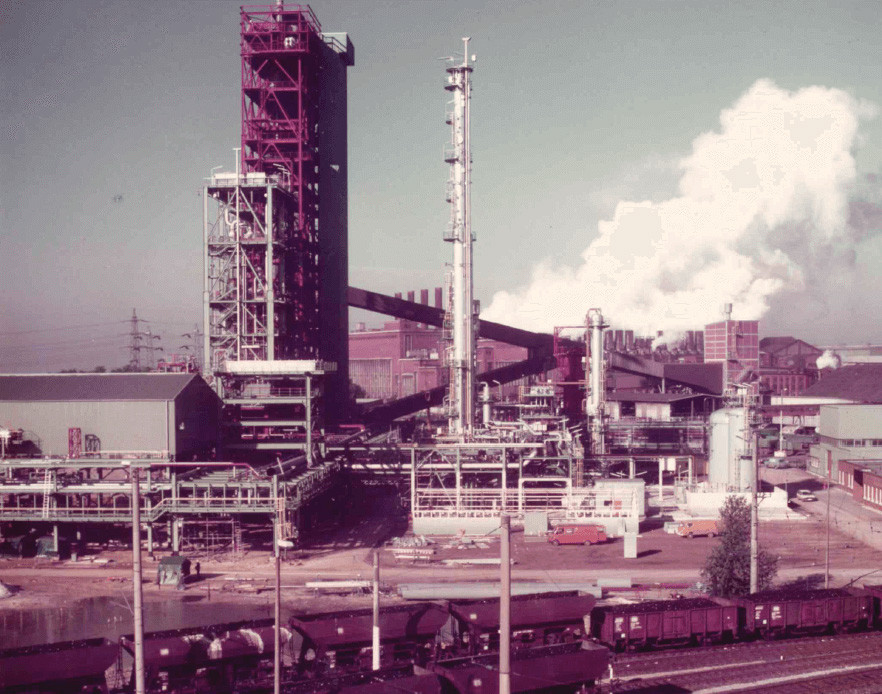 The HTW gasifier is a bubbling fluidized-bed (BFB) reactor which operates in either air or oxygen blown modes. It is a dry-feed, pressurized, dry ash gasifier. A key advantage of the technology is the capability to gasify a variety of different feedstocks, including all grades of more reactive low-rank coals with a higher ash softening temperature (i.e., brown coal), and also various forms of biomass; wood, refuse derived fuel (RDF) and municipal solid waste (MSW) have all been commercially applied.

Due to the high outlet temperature, the syngas does not contain any higher molecular weight hydrocarbons, such as tars, phenols, and other heavy aromatics.

In the fluidized bed, a high material and energy transfer rate is achieved and this guarantees a uniform distribution of the temperature throughout the gasifier. The temperature is maintained below the ash softening point. 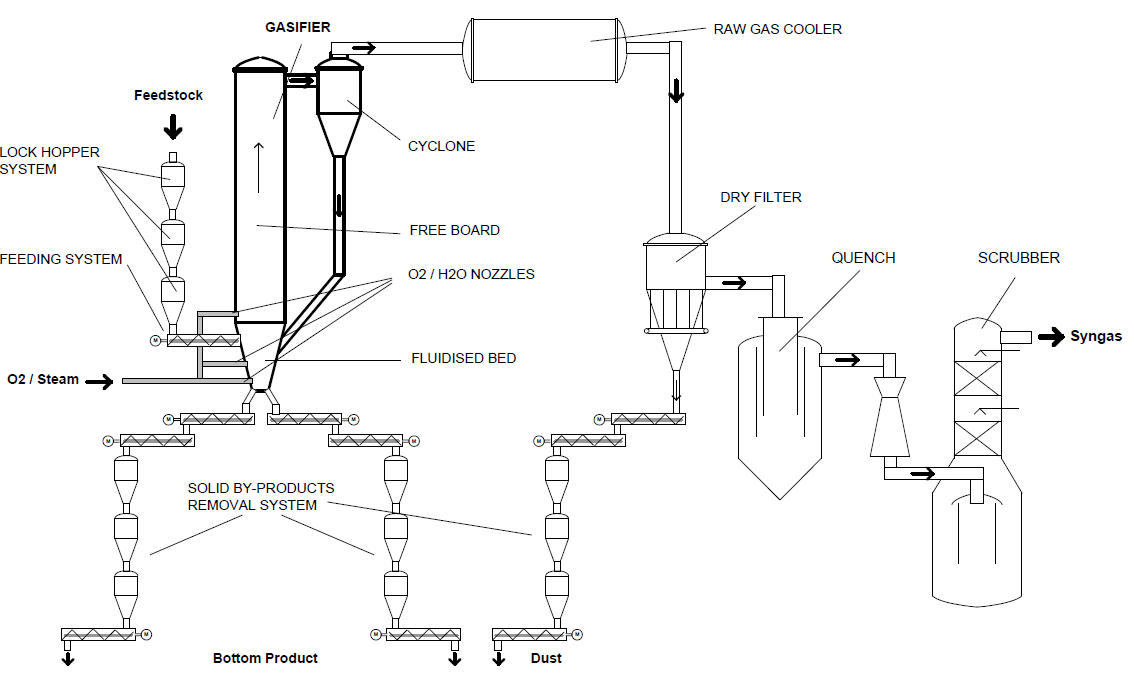 The HTW® system mainly consists of a gasifier and a cyclone with a gravity return pipe, which is used for converting feedstock to syngas. Because of the pressure in the gasifier, both the feeding system as well as the bottom ash and dust removal have to be performed by lock-hopper systems. With the aid of the gasification agents, i.e. oxygen (O­2) and steam (H2O), the biomass-derived material is converted in the gasifier to the raw syngas. The major part of the carbon conversion takes place in the lower section of the gasifier where the feed particles are in a fluidized state. The fluidization gas mainly consists of the gasification agents used and the raw syngas formed. In the so-called post-gasification zone, which is formed in the upper section of the gasifier, additional Oxygen and steam are being added to complete the gasification process, therefore, improving the gas quality and the conversion rate due to the temperature increase. The majority of fine ash particulate and dust entrained in the obtained raw syngas are removed in a cyclone and returned to the gasifier for a higher conversion rate and raw syngas is cooled in a gas cooler by producing high-pressure steam. Ash is removed from the base of the gasifier through an ash discharge system and dust is removed in a dry dust filter.

Million Since the 1970's, over 500 million euro has been invested by RWE/TKIS in the further development of the HTW Technology.

The plants based on HTW show excellent availability, performing at an average of 91% over the course of 10 years. HTW will perform with an even higher availability of over 96%.

Since 1926, 40 Winkler gasifiers have been built, with 7 utilizing the HTW technology.

GIDARA Energy has established design of a standardized unit to process non-recyclable waste into a variety of end products. The process blocks have a modular design. This standardized sizing and design results in a significant reduction of project schedule and costs. In case of higher demand of product capacity, several standardized units can be implemented in parallel.